Anglo-Scottish high-speed rail: the time is nigh

We have been promised – by successive Secretaries of State for Transport – a truly national high-speed rail network. When it comes to the long geography of northern England and southern Scotland, the north-south orientation of the country is laid bare. Yet here where the advantages of shorter journey times of high-speed rail are so palpable, and where there’s a huge domestic air market to address, we have so far seen only hesitation.

There have been leaks about a poor business case, from a study about extending high speed lines to Scotland commissioned back in October 2012 – and this in stark contrast to the findings of two major independent studies carried out in 2009, by Network Rail and Greengauge 21 respectively. But Cabinet Secretary for Infrastructure, Investment and Cities, Keith Brown MSP, speaking at a specially convened conference in Newcastle on February 17th, hinted that come March this year we may expect a joint Holyrood/Westminster announcement on the study conclusions – safely ahead of the purdah period that must precede the Scottish Parliamentary elections.

The key objective, repeatedly stated by Scottish Ministers, amongst others, is a 3 hour journey time between Glasgow/Edinburgh and London. It is true that both the east and west coast train operators have made inroads into the airline market already with 4 hour+ timings, but the evidence from elsewhere is that getting rail to a consistent 3 hour offer is what it takes to lift rail market share from around the 25% level towards 75%.

Given the head-start HS2 offers between London and Crewe, and the prospect of new or at least upgraded routes into the centres of Glasgow and Edinburgh, there are interesting choices on how 3 hours can be achieved. These choices are of a very different nature to those that have confronted HS2 Ltd’s planners further south. Here, the question of upgrade as an alternative to new-build is a central question.

And there are other critical factors besides journey time outcomes to consider. Also needing careful thought are questions of line capacity, growing markets and the changing traffic mix (including freight); the need for renewals of the existing network (the northern part of the WCML was largely untouched by the £9bn WCRM programme); network resilience (especially in the face of climate change effects); train service reliability – all these affect the design choices to be made. No doubt too there will be contentious environmental constraints to consider, and the question of how best to phase implementation over such a lengthy corridor.

The issues for the northern English stakeholders – and especially those in Lancashire, Cumbria and the North East, were researched several years ago (see reference 1). High-speed rail was welcomed in general: these are parts of Britain where a sense of remoteness can be keenly felt. But the new and faster connections that stakeholders sought were not limited to better connections with London. Connections between Scotland and Northern (and Midland) English cities matter too.

The evidence of huge traffic growth levels on Birmingham and Manchester – Scotland services bears this out. While London – Glasgow volumes grew by 144% in the six years following 2007, Manchester – Scotland flows grew by 191% and Birmingham – Scotland by 261%. So it shouldn’t surprise us to learn that the new TransPennine Express franchisee has made commitments (as of December 2015) to introduce cross-border services between Liverpool and Glasgow/Edinburgh and to extend services via Manchester and Leeds northwards from Newcastle to Edinburgh – all with 125mph capable units. These services weren’t called for in the franchise competition. They are bid offerings happily accepted as commitments by DfT, a valuable signal that this kind of service now has a commercial rationale.

And so it isn’t hard to see how service frequency will inevitably increase in response to market demand and service enhancement over the years to come on both the east and the west coast. Earlier last year, in a presentation at a special conference in Glasgow (see reference 2), Greengauge 21 showed how longer distance passenger train paths on the west coast might double over the years to 2030, and that’s before considering the uplift effect of possible speed enhancements north of Crewe. With 8-9 passenger trains/hour, with differing intermediate station calling patterns, even if all services run with 125 mile/h rolling stock, there is still the problem that some trains will have tilt and some not. With time differentials eating up line capacity, timetabling will become problematic. And this is where the case for high-speed rail becomes so much stronger. Without it, prospective demand has to be turned away.

The passenger growth trend is set. Network Rail also has to consider the problem of very significant speed differentials with freight trains over 180 miles of what is essentially double track railway from Motherwell to Preston, with – at present – freight loops of inadequate length and entry/exit speeds. So it is clear that the northern part of the West Coast Main line faces a capacity problem. This is crucial both to finding the best way to deliver the 3 hour journey time and to developing the business case for investment. The capacity question pinpoints the need for investment, not just its desirability.

Will capacity for market and service growth have been addressed in the HS2 Ltd study for DfT and Transport Scotland? Will it have taken into account the increased use of the WCML from the new TPE franchise commitments? More likely, today’s service levels will have formed the back-drop: only committed investments appear in so-called ‘do minimum’ cases in project appraisals.

Optioneering, led by HS2 Ltd, will inevitably centre on new-build alignments: this is the company’s core area of competence, after all. Instinctively, given their remit, HS2 Ltd will consider options taking HS2 further north to Preston (for which options have already been made known) or perhaps onwards to Lancaster, beyond which the terrain soon becomes more problematic. But if combined with improved access to the Scottish cities’ central stations using high-speed rail in Scotland’s central belt, this alone could deliver 3 hour journey times (especially if the retrograde and time-wasting idea of dividing and joining HS2 trains at Carstairs is dropped). But it wouldn’t provide the network capacity needed. The existing railway between (say) Carstairs and Lancaster simply wouldn’t cope. The option of building new high-speed lines throughout would solve this problem, of course, but at a very high cost, and a total overshoot of the 3-hour target. Welcome in the longer term, no doubt, but not a runner as a next step.

Another approach could centre on removing the lowest speed sections of route (through Carlisle, for instance) and on providing useably lengthy sections of four track, so that non-stopping services can overtake both slower freight trains and those making intermediate station calls. 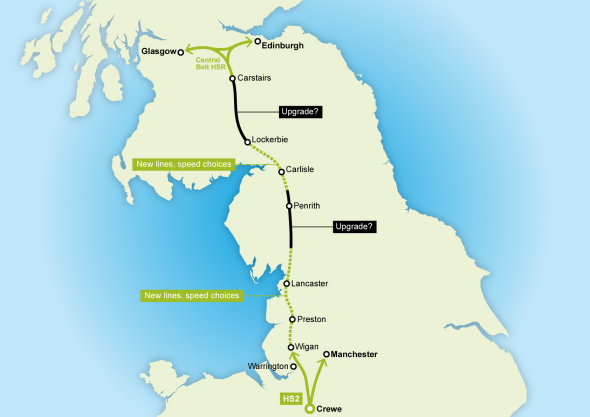 Any options will be subject to project appraisal assumptions, however, that inhibit proper recognition of the underlying growth in market demand. Consistent with HS2 appraisals published to date, annual demand growth of around 2% will be assumed, even though last year Virgin’s West Coast services were recording 10%. And it gets worse. Current appraisal rules suggest demand growth will max-out 20 years hence. A service expansion of the type illustrated in the table above will have been precluded from the appraisal. And freight growth will likely be disregarded too.

The network capacity rationale will scarcely figure in an appraisal centred on the value of time savings. The very factors visible today on the WCML which led SNCF fifty years ago to plan the Paris-Lyon TGV (an existing network struggling to accommodate expected growth in both passenger and freight services) will be assumed not to apply. Assuming the problem away is surely not an answer.

Westminster and Holyrood Ministers would do well to disregard the benefit:cost ratios in the economic case they will have had put before them for these reasons.

But surely, they will see the strategic argument. Hopefully they will reflect on the value of cross-border investment both to the Northern Powerhouse agenda and to the Scottish economy. More cross-border trade helps both economies. Interestingly, Transport for the North and Transport Scotland signed a Memorandum of Understanding committing the two bodies to work together on February 17th in Newcastle (see reference 3). We know that much of the investment needed will lie within the central belt of Scotland, and the rest in the North of England. And while the 3 hour objective is clear, the way in which cross-border services might develop and serve Northern (and Midland) cities is much less apparent. These two bodies have a key role to play.

So, here is a real test of the commitment to devolution. Why not invite the two parties, under their new MoU, to form a joint client body to take this challenge forward, providing oversight to HS2 Ltd and Network Rail, and working to an ambitious Chancellor-backed growth remit?

Reference 3 – the memorandum can be found at http://tinyurl.com/he2gdj4

This article can also be found in RAIL Issue 796

Some Rights Reserved: We actively encourage people to use our work, and simply request that the use of any of our material is credited to Greengauge 21 in the following way: Greengauge 21, Title, Date