Greengauge 21 was asked to provide a key policy component in the UK 2070 Commission’s enquiry into regional inequalities that reported in September 2019. As one of its seven priorities in a call for action, the Commission calls for a connectivity revolution.

The full Greengauge 21 report can be found here: The UK’s 2070 Transport Infrastructure Requirement

In an era of online, digitised and personalised consumption patterns, it still makes sense to address the nation’s needs primarily through a network of shared transport services (rail, metro and bus).

Such an approach contributes to meeting Government-adopted environmental targets. It builds on what exists (a substantial rail network) and provides the missing links, electrifies all busy routes, and – for the first time in the UK – proposes an integration of rail and bus, longer distance and local services, with common fares and a set of hubs and ‘mini-hubs’. It has the potential for more efficient use of limited network capacity, and to contribute to meeting Government-adopted environmental targets.

The UK2070 Commission’s vision for a connected Britain, is based on environmental standards to meet the national carbon target in 2050, and has the following components: 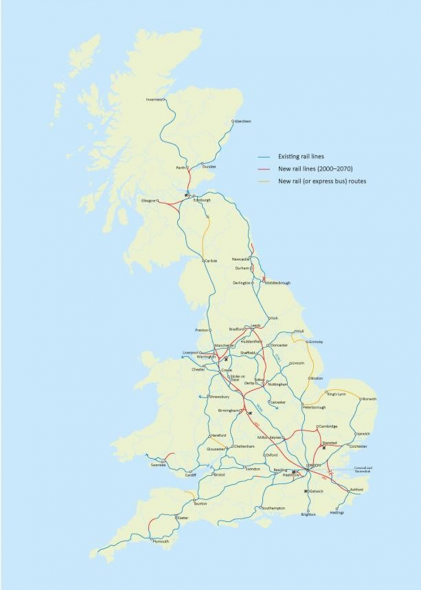 The Greengauge 21 plan presumes that HS2 is built and calls for:

The eastern side of the country needs special attention

The Greengauge21 Report highlights the fact that the eastern side of the country, especially coastal areas and including the East Midlands is identified as requiring particular attention to reduce social and economic inequalities. It illustrates how this might be addressed through, for example, the measures based on: 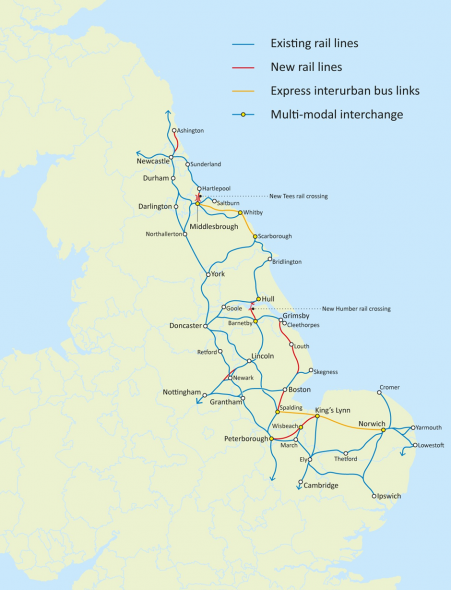