Greengauge 21 warmly welcomes the Government’s commitment to develop Crewe as an integrated high-speed rail/conventional rail hub station by 2027, when it will provide a fitting culmination to HS2 Phase 2a. The planned investment has benefit:cost ratios in the range 3.2:1 to 4.1:1.

The existing Crewe station, partially modernised in the 1960s, is badly out-dated, with poor road access and a poor railway track layout. 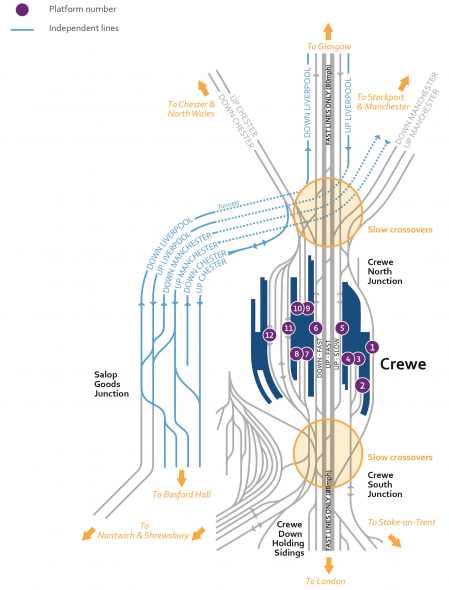 Passenger numbers have been growing at the existing station strongly – reaching 3million users per annum in 2010/1 – and 4.5million in 2016/7. It is a station that provides an extremely important connection between rail lines that run north-south, north east-south west and north west-south east. The station also attracts car users from a wide catchment and has 1,231 car parking spaces.

Crewe is also a very important place on the national railfreight network, with a major yard used to re -marshal trains and change train-crews. So planning how best to fit in HS2 services when they arrive in 2027 requires very careful planning which has been underway for the last few years.

The phasing plan for HS2 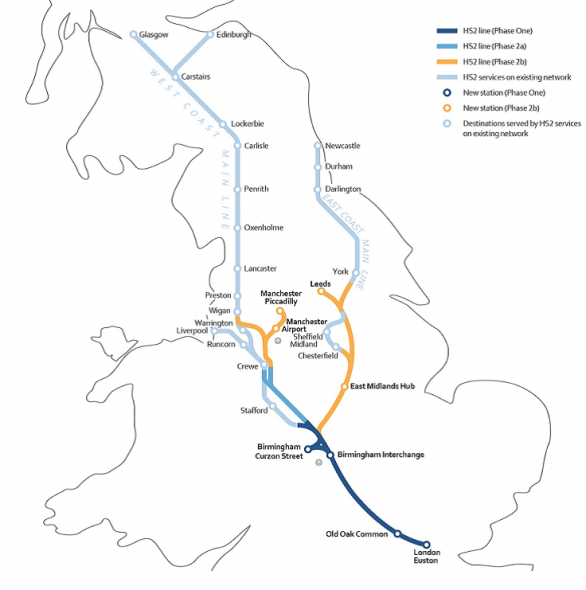 The work need includes creating an additional ‘through’ platform and extending platform lengths so that 400m long HS2 trains can call – and can be divided/joined as 2X200m units. It is this dividing and joining facility that allows a pair of northern destinations to be served (such as Liverpool and Lancaster) while using only one train path southwards to London on HS2. And this means that it is possible to add a new London HS2 service. On this basis, Government has determined that Stoke-on-Trent should be added to the list of cities that will have direct HS2 train services.(See ref 1)

Government has also committed to the idea that there should be a northern junction so that when Phase 2b opens, high-speed trains can continue to call at Crewe Hub. Funding for this facility is not committed at this stage, since it will form part of the Phase 2b works in due course. 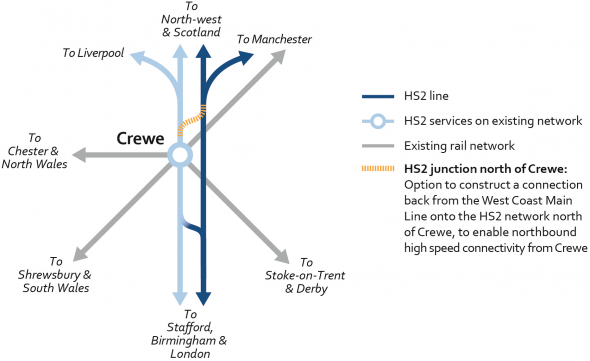 The station will have a new passenger transfer deck over the platforms. A new access is planned from the east side of the station (and potentially from the west too), replacing the very constrained north-end access from the Nantwich Road overbridge. The cost of better access including road schemes and parking will fall to the local authority and others to fund.

Access to Crewe station is constrained and sub-standard today

Most of the works need at Crewe to create the hub will be undertaken by  Network Rail which is in any event planning some key renewals works, with which the planned changes and improvements will be coordinated.

The Government’s consultation had elicited strongly positive responses to the idea of a Crewe Hub station. The Constellation Partnership and Growth Track 360, along with the local authority (Cheshire East County Council) and the Warrington and Cheshire LEP have argued strongly for the investment at Crewe that is now committed. These agencies have major regeneration and growth plans that depend on it that they can now start to implement.

By 2027, Crewe will be just 55 minutes from London, and the hub station’s catchment across North West England, North Wales and the North Midlands will benefit from this tremendous boost to connectivity.

Ref 1 – These strains will be developed through the planned West Coast Partnership – the planned new franchise for intercity and high-speed services on the West Coast Main Line that will span the period of HS2 service introduction. The additional service will operate Euston-Stafford-Stoke-on-Trent-Macclesfield, with the option of extending it to Manchester said to now be under consideration, developments long advocated by Greengauge 21 – see  http://www.greengauge21.net/general/stoke-and-staffordshire-can-be-key-hs2-beneficiaries-as-well-as-crewe/ from September 2014.