Greengauge 21 says that businesses in Yorkshire are showing how HS2 plans need to be adapted to deliver the Chancellor’s Northern Powerhouse vision.

Work by the West & North Yorkshire Chamber of Commerce shows how HS2 services could operate from an expanded Leeds City Station, rather than from a separate terminus station at New Lane. The Chamber also shows how poor links through Leeds – such as between Castleford, Pontefract and Bradford could be transformed, as part of a joined up plan. 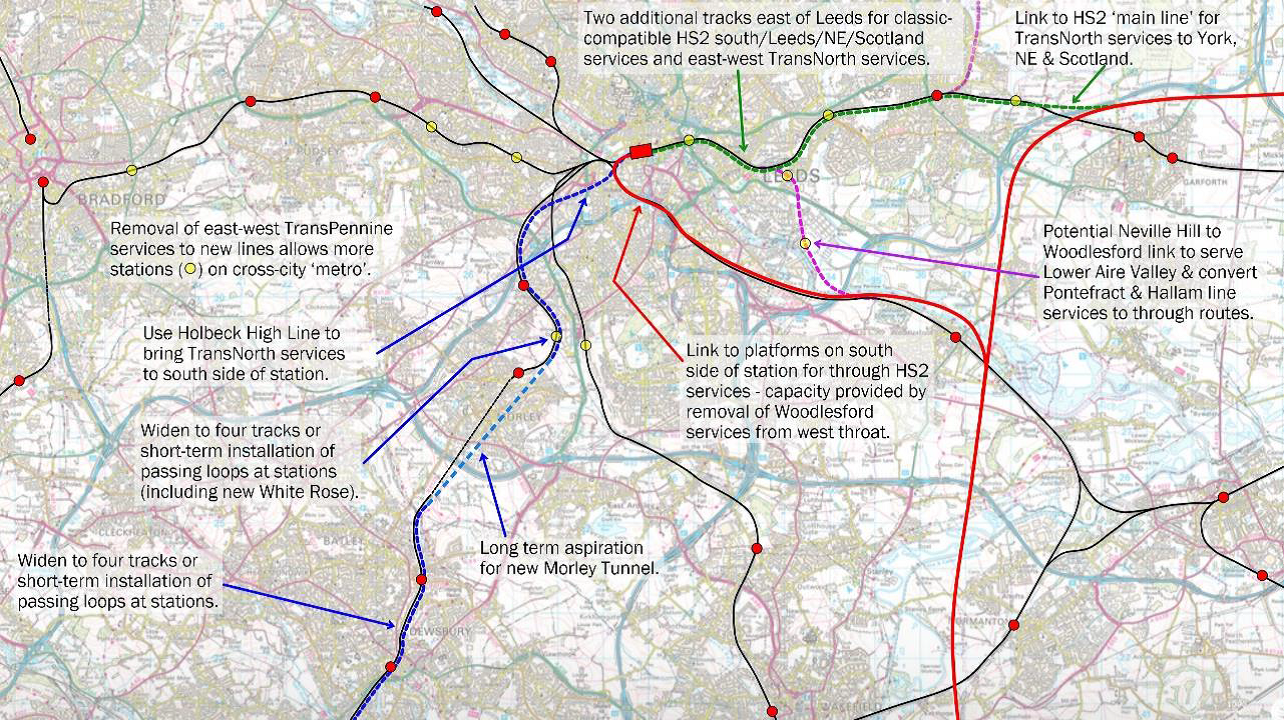 Source: Paper by the West & North Yorkshire Chamber of Commerce

“If HS2 is going to benefit the eastern side of the Pennines before the 2030s, then an accelerated Yorkshire component is the only option on the table,” John Jarvis points out. “The idea to build part of the Yorkshire section of the high-speed line early only makes sense if it is connected into the existing station at Leeds – a good fit with the Chamber of Commerce’s plans – and also into the existing station at Sheffield which would also need to be improved.”

The benefits of such an arrangement are huge – and are additional to (and very different from) the longer term gains that drive the current HS2 business case. “This is an interim stage that delivers two key parts of the Northern Powerhouse ambition, complementing developments west of the Pennines,” says John Jarvis, who was formerly transport lead for the Northern Way. “By halving the journey time between Sheffield and Leeds, existing services such as those between Bristol, Birmingham, Derby, Sheffield, Leeds, York and Newcastle and between Nottingham, Sheffield and Leeds can contribute a leap forward in joining up northern cities. And by taking these trains off slower, congested lines, capacity is freed up for more commuter capacity in the Leeds and Sheffield city regions, supporting an expansion of labour markets.”

Building the Yorkshire section of HS2 early would even make it possible to provide a 20 minute speed up in Leeds – London services before the 2030s. If an additional connection is made to the HS2 line in the West Midlands where it crosses existing lines, services from the slower Midland and East Coast Main lines could be switched to operate over the HS2 trunk route into the new Euston station before the full ‘Y shaped’ HS2 network is completed.

“We expect to learn Government’s response to its consultation on the Phase 2 plans later this year. But we already know that stakeholders want to see regional ‘Javelin- style’ services in Yorkshire like those operating so successfully in Kent on HS1. Prioritising the Yorkshire section of HS2 for completion in the 2020s, along with the extension to Crewe west of the Pennines would bring about the balanced kind of economic stimulus the North needs – east as well as west of the Pennines which underpinned the ‘Y-shaped’ network concept for HS2 in the first place”, John Jarvis said.