Greengauge 21 heralds a new report that completes a missing piece in the emerging plan to connect Glasgow to London by high-speed rail.

The Connecting Glasgow, Phase 2 Report, released today by the independent Glasgow Connectivity Commission, describes an exciting plan to capitalise on the ‘HS2 Opportunity’. It is one of three key inter-linked initiatives for the Glasgow city region’s rail network. The Commission was established by the City Council.

Its mission was to ‘consider strategic changes which not merely add to our already congested network but reshape its purpose in order to support future growth for the decades ahead’. Its plan has three elements: to develop a Glasgow Metro, to connect the city’s two main city rail terminals and to prepare Glasgow Central Station for HS2.

Just as in Greengauge 21’s Beyond HS2 report of last year, the report’s authors centre their analysis on the question of productivity. They point out that, over the last decade, Glasgow has recorded the second-highest increase in productivity of any of the UK Core Cities, but GVA per hour is 86.4% of the UK average whereas both Aberdeen and Edinburgh are well above the UK average.

The report recognises that developing new line-of-route infrastructure to support a sub-three-hour rail journey between Glasgow and London is critical, but says this is only part of the investment package required. Glasgow also needs an intercity terminal station to accommodate HS2.

The report’s authors recognise that from the first day of HS2 operation, trains will run north from London over HS2 and then over the existing West Coast Main Line to Glasgow. These trains will be 400m long, and there is no existing station in Glasgow able to accommodate them. As the report suggests:

‘Some form of strategic intervention is therefore required to make Glasgow ready for HS2, and to capture its benefits from the beginning.’

The report identifies three principal requirements for any high-speed rail terminal in Glasgow:

These requirements – if met – we would observe, should have a direct impact on lifting the city’s productivity levels to the national average, and beyond. It is late to be planning this development, but not, we believe, too late.

The Commission is of the view that there is only one credible option for a high-speed rail terminal in Glasgow. This is to redesign Glasgow Central to accommodate HS2 trains. 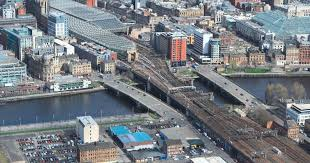 Image courtesy Network Rail: Glasgow Central station and the Clyde, from the south

This would require at the very least the extension of the station over the River Clyde including the reinstatement of the former additional bridge and tracks over the river to the east of the station approach. A new southern entrance and concourse roughly on the site of the former Bridge Street station would be provided. The report sees the advantages of such an approach being:

The report notes that there are some significant challenges to be overcome in redesigning Glasgow Central to accommodate HS2, but in each case Greengauge 21 believes there are solutions to hand. The challenges identified by the Commission – and Greengauge 21’s observations on them (in italics) – are:

The Commission further recommends that Transport Scotland – which, the report says – has become a recognised centre of excellence in project delivery – should become responsible for the implementation of the Glasgow Metro, Glasgow Central HS2 terminus and the Queen Street/Central Station tunnel.

Although remote from the first phases of HS2 line, it is imperative that Glasgow captures as many urban regeneration opportunities created by the introduction of HS2 services as possible. The Commission therefore recommends that a significant proportion (at least half) of an estimated Barnett consequential spend of close to £6bn from HS2 is ring-fenced for development of Glasgow Central Station and the first phase of high-speed line in Scotland to serve it, consistent with the vision of achieving a sub-three hour journey time to/from London.

Transport Scotland’s feasibility work into high-speed rail links to join with the main line network and HS2 in England were published in March 2019. Scotland faces two specific challenges that will hopefully see these proposals progress to the design stage swiftly:

The Transport Scotland high-speed route plans connect Strathclyde with both the west and east coast main lines. But they do not address the challenge of accessing Glasgow. That question has rightly been left to the Glasgow city-region to consider and it has done so through this comprehensive piece of work by the Connectivity Commission. It has provided an until-now missing link in creating a 3-hour rail journey time from London to Glasgow which adds such large environmental benefits to the HS2 project because of the effect it will have on curtailing the volume of Anglo-Scottish short-haul flights.