How HS2 can power regional economies

HS2 – now with Parliamentary Powers – is triggering private sector investment around stations, and not just in major cities.

By 2026, stations in the historic counties of Staffordshire and Warwickshire will get HS2 services.

The new Stafford Gateway Masterplan would regenerate largely disused land near to Stafford railway station where HS2 services will be operating over existing rail lines. It could provide 800 apartments/houses as well as new work-spaces. 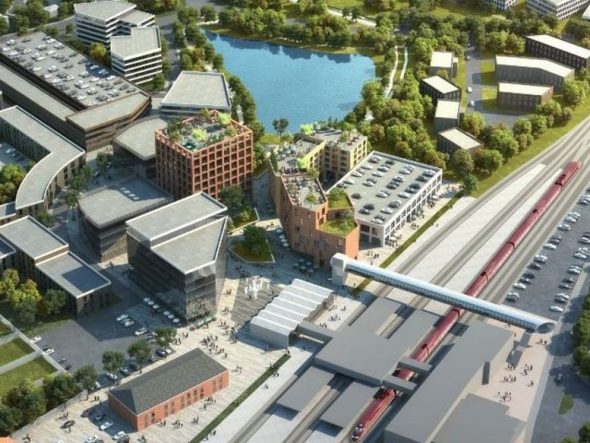 At Birmingham Interchange in Solihull, the prospects for much more productive development around the station than the major car parks in published plans to date were discussed at the HSR Industry Leaders’ conference held on June 22nd. Look out for emerging details from UK Central Solihull Urban Growth Company, expected in July.

The HS2 station may need some modification at Solihull. The existence of Parliamentary Powers (the station is part of the now-approved Phase 1) is no impediment to this type of improvement. Most major infrastructure projects are subject to design and delivery refinements post Royal Assent/Planning consent through variation provisions, to the benefit of local interests.

Refinements at the southern end of the route are also in need of consideration. For several reasons, Greengauge 21 believes that it is time to look again at the question of linking HS2 and HS1, spreading and magnifying the benefits of HS2. It would be good to add Kent and Essex to the list of counties that are well-connected by high-speed rail with the rest of the country and to ensure that high-speed rail links to Europe can be enjoyed by major cities in the Midlands and North as well as by London.

But there are more pertinent reasons for looking at this missing link again.

Amendments to the Parliamentary Bill to remove the provisions of the HS1 link were made as late as September 2015.

The abandoned plans had assumed that trains using the HS1-HS2 link would be of the larger European cross section, requiring extensive and unpopular infrastructure works to an existing railway at Camden Lock. Operation of international trains would have required additional (and lightly used) international-only platforms at HS2 stations. As a consequence, the costs and practicality of the connection were not propitious. Instead, long distance international rail passengers are now expected to traipse along the Euston Road between Euston and St Pancras International.

A number of things have changed (or become a lot clearer) since then. Together they convert the HS1-HS2 link from a problem to a solution.

The key developments are these:

In addition to the planned Phase 1 services, it is proposed that two trains/hour operate over a HS1-HS2 link – increased to four trains/hour at peak times. These services would call at Old Oak Common, Stratford, Ebbsfleet and Ashford.

Some of the train paths might be taken by international trains. As with the planned London-Amsterdam service, these might operate less than hourly to meet demand levels, say 5-6 times/day to/from HS2 destinations. These trains would need to be timed to avoid the domestic travel peaks in the London area.

But the primary use to be made of the HS1-HS2 link would be by domestic high-speed trains. New services extended via HS2 from the Midlands and North to HS1 stations (Stratford/Ebbsfleet/Ashford) could provide easy passenger transfer (across the platform) to the wider set of London-based international services: much better than walking along the busy Euston Road between Euston and St Pancras International.

Euston trains would not stop at Old Oak Common which would have the effect of speeding up HS2 journey times by about 6 minutes.

With 2-4 trains/hour still serving Old Oak, the scale of the HS2 station could be usefully scaled back (only one platform instead of three as under current plans is needed in each direction), making the station much easier to use. It will also be less costly to construct, and consume less space than is provided for in the granted powers, freeing up further space for development.

With the Old Oak station call in effect being made ‘off-line’ as far as HS2 operational integrity is concerned, there is no need to constrain the station dwell time to 2 minutes. And a further benefit is that Old Oak would gain a fast connection to Stratford and to Kent, expanding its role as a key interchange (for instance, for Kent – Heathrow journeys).

The HS2 station at Old Oak is considered important to provide a passenger transfer between HS2 and Crossrail. A third of passengers in the morning peak period are expected to use this facility (the evening peak has not been separately modelled, but the proportion is likely to be significantly lower). In round numbers, this is 4,000 passengers/hour (with a 12 train/hour HS2 service plan), equivalent to four full HS2 train-loads. A 4 train/hour HS1-HS2 peak service proposition could provide the same hourly capacity relief to Euston as does the current train plan with all trains stopping at Old Oak Common.

Trains using the HS1-HS2 link would provide passengers with the choice of using Old Oak Common (with its interchange to Crossrail) or other stations including Stratford. This spreads the benefits of HS2, particularly to Kent and East Anglia (via Stratford). International services could (for example) operate from Manchester and call at Crewe and Birmingham Interchange and Old Oak Common (as well as stations on HS1).

The scope of Phase 2 works at Euston might also be reduced by this approach.

There will be other cases where changes to the HS2 plans will be made to increase project benefits and economic value (we mentioned the case of Birmingham Interchange earlier). We have identified a way forward to re-instatement of the currently abandoned HS1- HS2 link which adds economic value and which could:

Provision of a HS1-HS2 link has potentially unparalleled stakeholder support. Its capital cost could be offset by cost savings at Old Oak Common and related increased development land value gains. The overall benefits – especially given the general speed-up to HS2 services, will be very substantial.

The earlier objection of a weak business case would be overcome. And powers should be obtainable relatively rapidly, picking up on the original Phase 1 Bill.

It is time to look again at how HS2 can most fully power our regional economies.

[Ref 2] HS2 Ltd trains will be TSI compliant, so international operation should be reasonably straight-forward with most attention needed on fitting additional train control systems and on a step design to address continental low platform heights

© July 2017, Greengauge 21, Some Rights Reserved: We actively encourage people to use our work, and simply request that the use of any of our material is credited to Greengauge 21 in the following way: Greengauge 21, Title, Date