The fast rail service from Okehampton to Exeter launched in November 2021 has seen first year passenger carryings (over 0.25m) exceed forecasts by more than a factor of two. Its success led to a major re-think of bus routes and the creation of a bus-rail interchange station at Okehampton, where restoration works were completed last month. 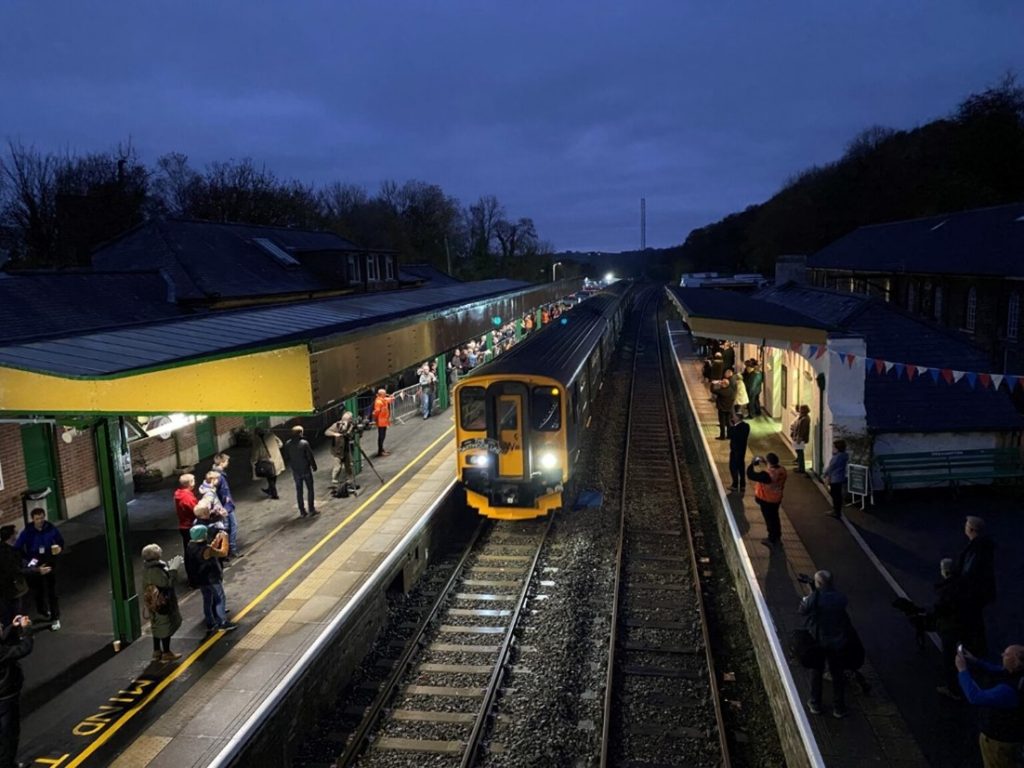 Greengauge 21 was commissioned by GWR in 2020 to examine wider social needs across the Okehampton rural catchment and identify the scope for bus services to feed into the restored Okehampton station. Creating bus feeder routes from Bude and Launceston were top recommendations from this work.

As of end October 2022, we were therefore delighted to see that there now are direct bus connections at Okehampton station to and from Bude, Holsworthy and Launceston, timed to connect with the new train service. The Launceston bus connection is financially supported by Cornwall Council and Devon County Council.

When the rail service started a year earlier, an initial connecting bus service, also timed with the new train service at Okehampton station, was introduced to and from Lydford, Brentor and Tavistock. These bus services permit, for example, full-time job and College placements in Exeter from a much wider rural catchment, providing a boost to the local economy and skills base.

“Is this the way to go for the ‘Restore Your Railway’ programme in 2023?”, asks Greengauge 21 Director Jim Steer. “Rather than just conceptualising a rail service, why not show how rail service re-instatement can help build local economies through an integrated public transport network? Maybe the programme can be a stimulus towards a single nationwide public transport network”, he adds.

GWR’s national ‘railway’ map now shows integrated bus connections with ‘through rail ticketing’ – see below (noting that the new Launceston route is not yet shown). 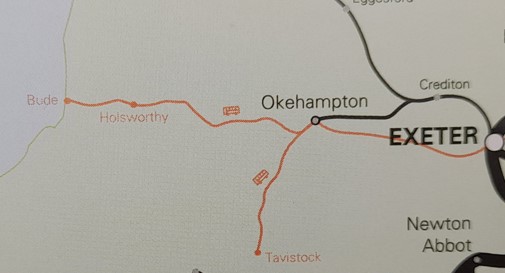 Remarkably the three rail-integrated bus routes shown radiating from Okehampton have very few counterparts in other parts of the country. While the GWR network has six further bus routes with through rail ticketing, across the rest of England only buses serving King’s Lynn (2 routes), Luton-Dunstable, Catterick-Darlington, and Barton-upon Humber-Hull appear on the national rail map. There are a further five such routes in Scotland but only one in Wales.

So, the Okehampton network integration project will be studied with great interest.

As Barry Doe writing in current issue RAIL 973 comments: “There is [now] a separate bus covering the intermediate places between Exeter and Okehampton which are not rail-served. But for those wanting to access Bude, instead of a 2-hour bus journey [from Exeter], it’s just a 67 minute bus journey from Okehampton.” He points to ‘less hassle’ than changing at Exeter St David’s’ and another advantage that rail offers over a lengthy bus trip: an on-board toilet!

Greengauge 21’s first involvement in this exciting development stems from work commissioned by CPRE and CBT in 2015. This noted that:

“Bude is said to be the town furthest from a railway station in England (45 miles to Exeter). The wider catchment extending beyond West Devon into North Cornwall and Torridge illustrated needs to be considered too, since places such as Launceston, Holsworthy and Bude could be brought much closer to the national rail network.”

It was clear then that Okehampton could become a key public transport hub, serving the towns of north east Cornwall as well as much of rural Devon.

But Okehampton-Exeter is just the first of three stages in creating a ‘green main line’ between Exeter and Plymouth. As Greengauge 21 pointed out in its 2015 study, adaptation to climate change is the main driver behind the need to create a second line to Plymouth and Cornwall that avoids the high-risk coastal section along the Exe and Teign estuaries and under the cliffs between Dawlish and Teignmouth.

The TORS group (Tavistock Okehampton Re-opening Scheme) initially envisaged a complete Exeter-Plymouth line via Tavistock and Okehampton, but it became clear that a phased approach would be better.

TORS is now working on an approach that concentrates on the most reasonable cost version of a full line re-instatement, and they plan to publish their approach later in Spring this year.

This will no doubt build on submissions to re-create a Tavistock-Plymouth link next, encouraged by the success of the Okehampton scheme. But it will be the addition of the missing middle section (Tavistock-Okehampton) as a third stage that would be transformational. The second (northern) route infrastructure ensures the South West England is no longer dependent on a single vulnerable rail link, its creation an adaptation to forthcoming sea level rises and increased storms, as envisaged, for example, by the Environment Agency. No city as large as Plymouth and no English County other than Cornwall has but one railway line to connect with the rest of the country.

We actively encourage people to use our work, and simply request that the use of any of our material is credited to Greengauge 21 in the following way: Greengauge 21, Title, Date.