Government has published its remit for developing the integrated rail plan for the Midlands and North – which it terms High Speed North. The remit lists four key aims and the fourth is perhaps the one that risks getting least attention:

“How best to deliver rail connectivity with Scotland, in conjunction with the Scottish Government.”

It’s easy to overlook the huge air market that exists – well, did exist before Covid 19 – between Scottish and English airports. The Glasgow/Edinburgh – London daily aircraft movements in particular were huge (around 60/day each way) pre Covid 19. At the same time, rail has been increasing its market share as getting through airports has become less straightforward and Air Passenger Duty has added to domestic flight prices.

A report recently published by UBS Research suggests that many travellers will switch from air to high speed rail in the post Covid-19 period.

People are increasingly aware of the very high carbon costs of short haul flights and looking to find alternatives. Today’s rail journeys between London and Glasgow/Edinburgh take around 4h20. Faster rail journey times are a critical factor in customers’ choice equation. The existing railway line north of Crewe needs an upgrade to nudge them towards the lower carbon option of rail.

The speed-restricted northern approach to Carlisle on the West Coast Main Line that links London, Birmingham, Manchester and Liverpool with Glasgow, Edinburgh and Aberdeen 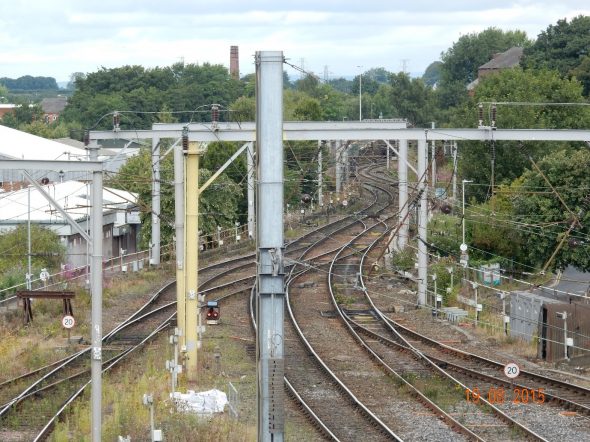 Ministers from Westminster and Holyrood agreed in 2015 to work together in getting towards a 3h London-Glasgow/Edinburgh journey time. Not much has happened since, but the commitments made to advance high-speed rail between London and Crewe is a great start. Once HS2 Phase 1/2a is built, Crewe will be only 55 minutes from London.

So, the critical question for the High Speed North consultation is: what can be done to speed up journeys north of Crewe to the main Scottish cities? Whatever improvements are feasible, they will impact on significant air-rail travel choices, such as those between Liverpool, Manchester and Birmingham and Scottish cities, besides those to/from London’s various airports.

Covid 19 may well cause a one-off shift in change travel behaviour, and we wont know for sure until a few years’ time which modes of travel will emerge the stronger. But encouragement for renewed effort into improving rail’s attractions as part of the High Speed North work comes from the recent UBS research into just that subject area.

It suggests that many travellers will switch from air to high speed rail in the post Covid-19 period. ‘By Train or Plane?’ The Traveller’s Dilemma after Covid-19 and amid Climate Change Concerns was prepared by UBS researchers in an attempt to determine which business sectors will be most and least affected by the Covid-19 pandemic, what the short-, medium- and long-term options for aviation may be, and what market opportunity may exist in Western Europe.

The report found that consumers and governments were becoming ‘more climate aware’, with the Covid-19 outbreak revealing in industrialised countries ‘what clean air means’. Using data from the European Union, it states that aviation represents around 15% of transport-related emissions. In 2017, transport generated 4 483 million tonnes of CO2 equivalent, with road transport responsible for 73% of greenhouse gas emissions, aviation generating 14%, maritime 13∙5% and rail about 0∙5%. Noting that most governments in developed countries had set targets for net-zero carbon emissions by 2040 or 2050, the authors ‘therefore expect an acceleration in the shift from planes to high speed rail in both Europe and China’.

For short haul flights, rail comes into play as an alternative as well as teleconferencing options. Rail journey times for London-Glasgow/Edinburgh of 4h20 can be cut first by HS2 and then by further improvements that should be studied under the fourth part of HS North’s remit.

Greengauge 21 has done a lot of work in this territory and will be submitting evidence on this (and other aspects of the HS North agenda) to the National Infrastructure Commission’s current consultation on the subject.